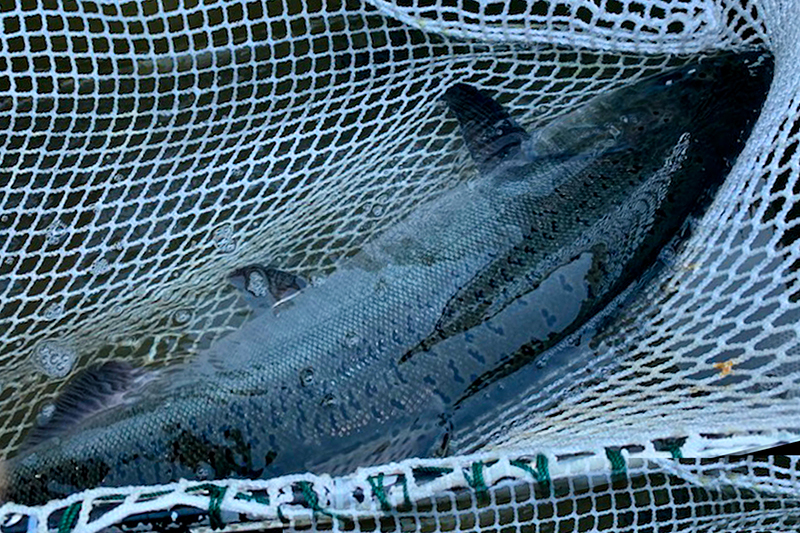 First fish of the year to be collected for the 2023 offspring.

Please check back for further updates. 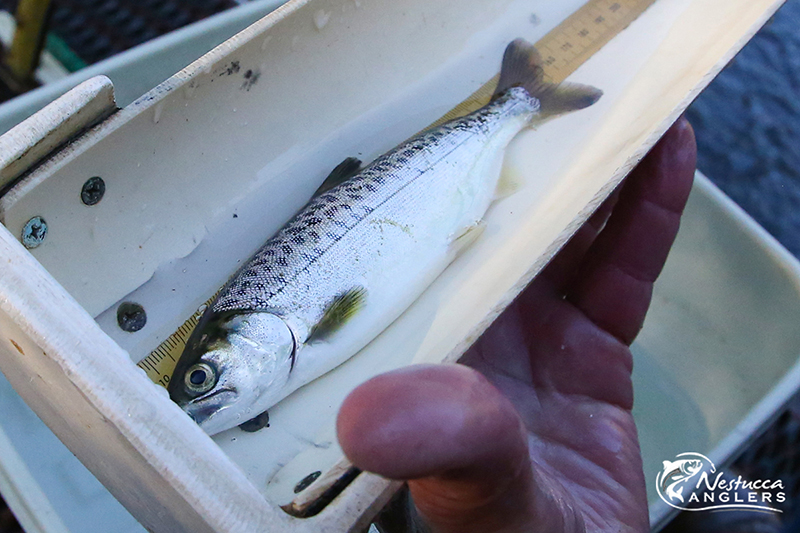 Nestucca Anglers released 105,000 August 17th. The fish went out to the Nestucca basin healthy and to size. Special thank you to all the feeding volunteers that took care of the fish throughout the season.

We will start collecting the broodstock for our 2022 offspring in September. Stay tuned as we will keep you updated on our collection process.

The following video clips below are from this years release. Video’s have been sized down but please allow time for video to load. 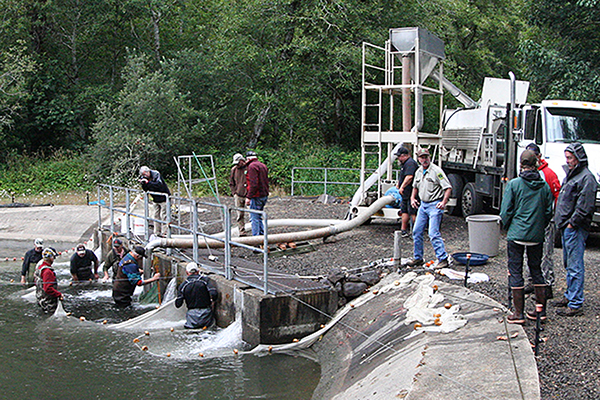 Liberation time is upon us and we need volunteers to help with the releasing of fish next week.

(08-14-22 9:00am): Our first job will be to vacuum the pond to assure a clean pond and water while we are seining the fish to the trucks that are hauling our 2021 offsprings to the Nestucca river. Bring waders and this task will only take few hours.

(08-17-22 6:00am): We will start early while the water is still cool which creates less stress on our fish. Bring your waders and looking forward to releasing another successful year of Fall Chinook into the Nestucca basin. 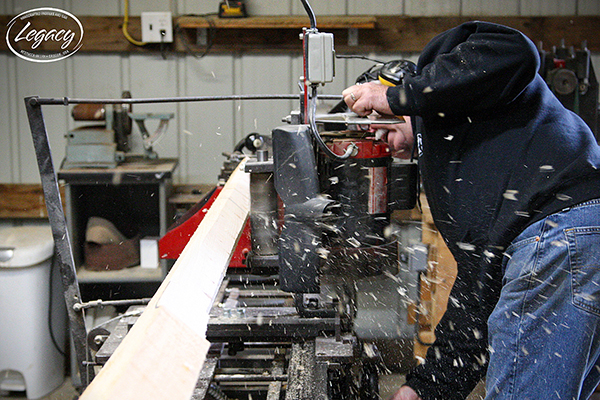 “Sometimes It’s Just Worth Carrying On”

Chances are if you are reading this you are familiar with the history of the Pacific City, Oregon Dorymen’s Association. Pacific City Dorymen’s Association (PCDA) is one of Oregon’s most active 501(c)3 charitable non-profit organizations and will soon be celebrating its 25th anniversary. PCDA continues to stand strong after the recent losses of legendary (Co-founder’s) and still today strives to protect, defend and promote the traditional culture and economic values of the dory fleet.

The Hanneman / Learned oars were legendary. They made over 200 sets of oars in 40 years. Unfortunately, with Paul’s failing health, the Oar Machine fell silent and sat motionless in the barn; gathering rust, grime and dust. The history of the machine is fuzzy. It started as an oar lathe for making oars for the Navy prior to WW II. Then sold to a man in Bay City who used it for making cedar floats for gill nets and crab pots. Then found its way to Paul and Terry in Pacific City.

In 2012, Linfield University completed an extensive historical study on the contemporary role of dorymen and the dories in the life of the coastal village of Pacific City, Oregon. In this study, Linfield posted detailed historical notes on how both Paul Hanneman and Terry Learned purchased and modified a homemade lathe from the 1930’s to design a high demand dory oars.

Paul Hanneman had spoken with Dave Gordon before Paul’s death and told him of his wish for Dave to take the oar machine and continue. Unfortunately, before the machine could be moved and restored Paul passed away.  Also at this time, Terry had moved to Alaska. This meant Dave and future partner Jon were on their own to figure out how to restore and run the Oar Machine and make quality oars.

Jon Warren and Dave Gordon had become friends over beers; Dave serving, Jon drinking at the local pub. In those conversations they each learned of the other’s appreciation of good wooden oars (from rafting days) and a wish of being able to build wooden oars.

The Dave/Jon phase of the machine started with moving it to Jon’s barn in Cloverdale.  Then came many months of disassembly, scrapping off gunk, cleaning, and rebuild.  One of the significant parts of the rebuild was the motor.  When the machine started life, it ran off of a Jack Shaft (central pulley systems once used in machine shops).  When moved from the machine shop, a motor was installed.  During Dave’s research of the motor, he found it had originated at the Hudson House used to pump water.  Dave’s research and reading of blogs also lead him to the key as to how to get the motor to run in the opposite direction —  needed for how Jon and Dave had the machine set up.

The rebuild highlighted to Jon and Dave the intricacies of the design; wooden pulleys with leather belts, pattern forms the cutting head follows to make consistent tapers. It took nearly a year, 13 tries and the creation of a lot of sawdust and firewood, before Jon and Dave made their first good oars.

When you talk with Jon he will tell you “I have been building machine tools most of my adult life and this was truly a challenge for Dave and I to understand how this machine works.  It is an Old Lady.  Some days it is hard to get it to move.  She is noisy, cranky and needs lots of TLC.  But we love making really high quality oars on this Legacy Tool. 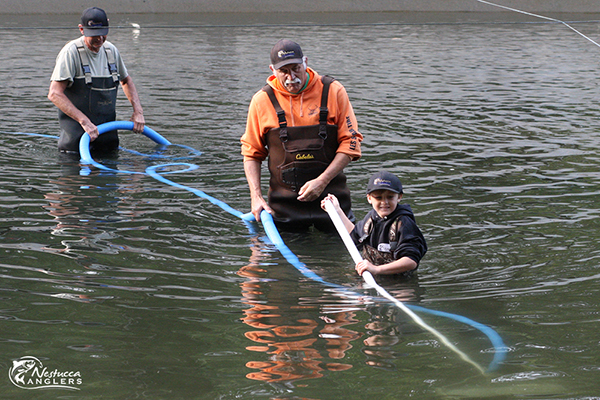 We just lost a very special Board Member of the Nestucca Anglers. 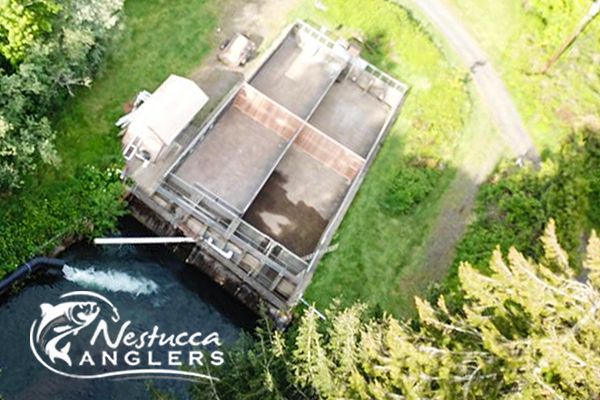 On Saturday July 9th, Nestucca Angler Volunteers teamed up again with ODFW and Cedar Creek Hatchery. This additional 8’ wall in pond 12 was built to help with the crowding/sorting of future Broodstock.

Thank you all for your continued support. 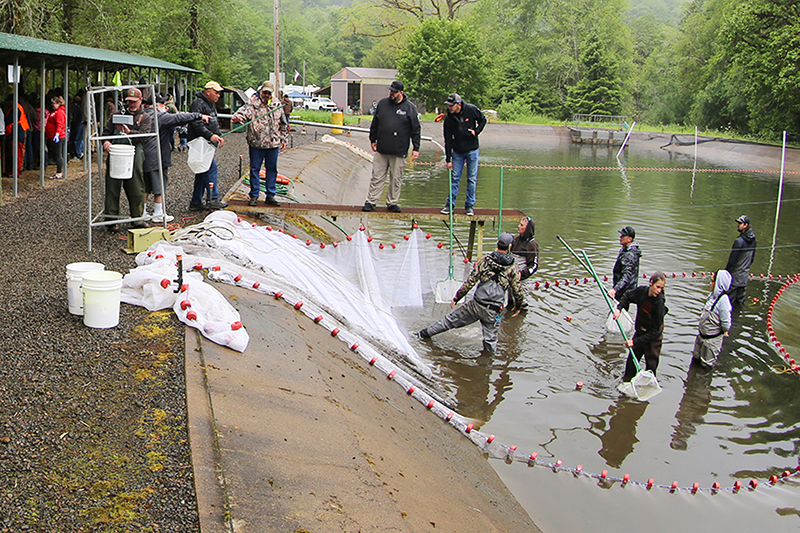 What a great day!

The smolts will continue to be fed by volunteers and released into the Nestucca basin toward the end of August.

Thank you to all our volunteers, sponsors and contributors.

It makes a difference. 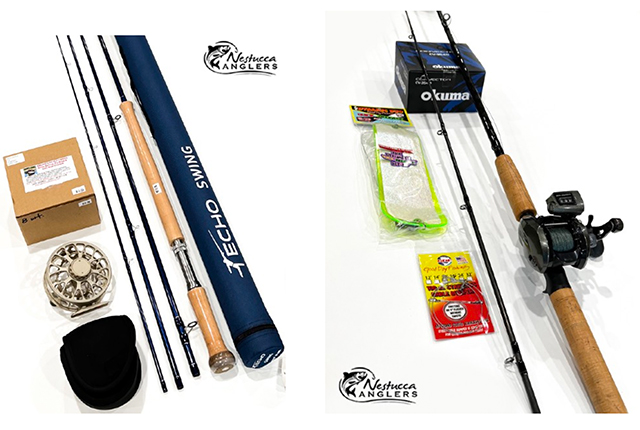 We have a number of donated items for this years event from various sponsors as well as local business to silent auction, raffle and give away at the BBQ lunch. (BYOC) Bring your own chair and join us in the festivities and fun.

It’s donations like these that do “Make A Difference” and allow this program to be successful year after year. Nestucca Anglers is a 501(c)3 nonprofit corporation and all donations are tax deductible.

All proceeds go towards: 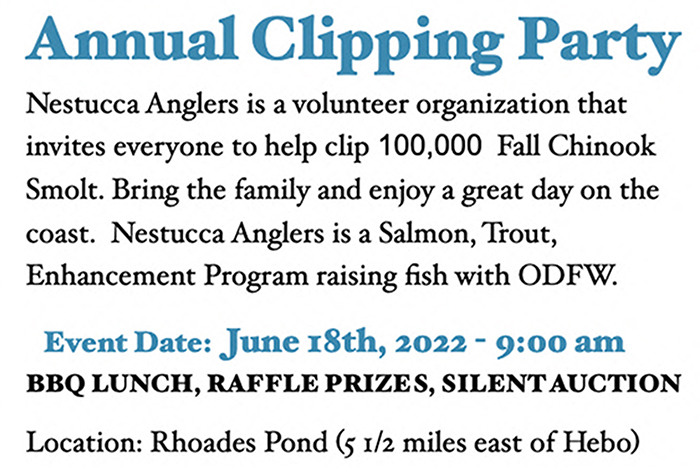 Save the date, mark your calender !

Nestucca Anglers is a volunteer organization that invites everyone to help clip 100,000 Fall Chinook Smolt annually. Bring the family and enjoy a great day with us on the coast.

Stay tuned, more info to follow. We have lots of raffle and auction items that have been donated from sponsors. More to come…… 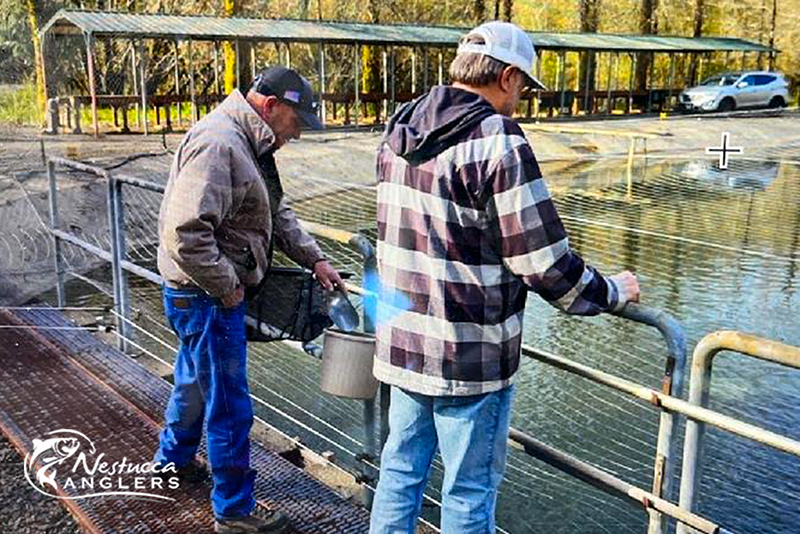 Ron showed Don what the Volunteers do everyday.

Thank you for your support Hatchery & Wild Coexist.